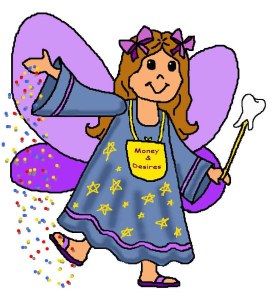 My 6-old-son, “Soren”, lost his first tooth.  When the tooth first became loose, he told my wife, “You know Mom, I don’t believe in the tooth fairy.”  Soren has long prided himself in his insights (don’t know where he gets that).

“Well,” Soren sincerely replied, “what would a fairy do with all those teeth anyway?”

My wife smiled and that was the end of his insightful dispelling of yet another childhood myth — or so we thought.

Soren’s tooth came out a few days later but apparently, just before loosing the tooth, he had a chat with his baby-sitter (our next-door-neighbor).  The baby-sitter excitedly rejoiced with Soren about his loose tooth and ask how much money he gets from the tooth fairy.  That was all Soren needed.  Soren now again believed in the tooth fairy when he realized, with tooth in hand, that he could actually get money in exchange for this now useless tooth.

Children are able to sacrifice rationality and embrace myths as long as the trade-off is worth it.  Humans seem to be born with this simple economic tendency.  People are willing to sacrifice rationality and believe all sorts of myths if the act of believing can guarantee them friends, club activities, moral-teaching mechanisms, existential peace-of-mind, a girl-friend, political-legitimacy, respect-in-the-town and the like.  Religions which make the trade-off of rationality worth it are religions that survive.

The Tooth Fairy lives !  Soren got a dollar for his tooth.

It seems like Soren may also want his rationality back  at the end of his childhood.  In the meanwhile, his childhood myths serve their purposes.  And in adulthood Soren will have yet further chances to grab bigger & better myths!

Finally, please don’t get me wrong folks, “rationality” is often over-rated.  For many folks, the benefits of sacrificing reason far outweigh the costs.