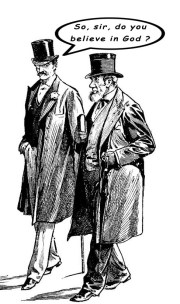 When a theist asks me “Do you believe in God“, I could simply reply “No“, but that answer would be dishonest for three reasons — all dependent on my understanding of the human mind. The 3rd reason is explored in this post.

Concerning the word “you“:  In my philosophy of mind “you” is problematic.  I see the mind as a fluxing of many different non-permanent selves.  I think that any given time, the self we perceive ourselves to be is simply a temporary, functional awareness of only a few of the unconscious operating parts of our brain.1

Concerning the word “believe“:  I think each of us can hold multiple contradictory beliefs simultaneously.  And in my case, sure, at least one of my many selves believes in a god.2 Yeah, yeah, I am an atheist, but … see how difficult these conversations can get when you hold a view of mind like mine !

Concerning the word “God“:  So though parts of me may believe in a god, the interrogator may have a very different intuitive feeling  for “god” than I do.  In the remainder of the post I describe an unusual way I sometimes view “god” which is probably very different than the “God” intended by questions from most Christians, Jews, Muslims etc.  And since my meaning significantly different from theirs, if I answer “Yes, I believe in God“, it misleads the listener to think that I fully believe in the kind of god they believe in. Instead, my god is a kind of Monkey God.

When Western theists ask about “God”, they are usually referring to an all-powerful, intervening, all-knowing, personal, all-loving and yet historically easily-angered, jealous and dangerous god.  This story illustrates a different notion of the divine.

Just as in Christianity, there are many different denominations of Hinduism with each believing very different theologies.    One Hindu analogy to illustrate their different theologies is Monkey vs. Cat Religions.3 During my two years in India and Pakistan I heard this explanation several times when debating religion with Sadhus ! 3 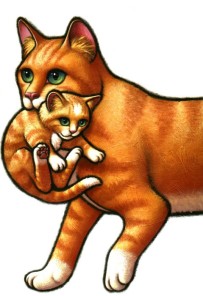 Have you ever seen a baby cat carried by its mother?  What does the kitten do? The kitten does nothing — it just submissively hangs there in surrender while the mother carries it all around.  Thus in cat religions, the believer is dependent upon the god for salvation and for grace.  One only need to surrender and the mother (the god) protects and saves the baby.  There are two main Hindu sects: Vaishnavism (worship of Vishnu) and Shaivism (worship of Shiva).  The Vaishnavite embrace a Cat God — Vishnu whom the hope their faith, adoration and surrender to secures them a good life and salvation.  Sound familiar? 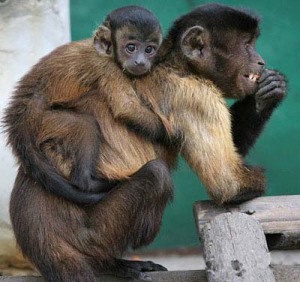 On the other hand, imagine how a mother monkey carries her baby — she doesn’t!  The mother monkey actually barely pays attention to the baby monkey. The baby monkey must hold on for dear life.  Thus in monkey religions, salvation is made by the effort of the believer.  The god (here the monkey) is available for sustenance while not even being aware of the believer — this god is not personal and has no people-like traits of knowing, loving, hating, desiring or even acting.  Here god is seen as a source of strength and love but a source that only is available by participation of the individual.

In Christianity, this sounds like the old  works vs. grace debate.  And even in Hinduism, sometimes it boils down to that. ( Wow, surprise, the human mind, be it a Hindu’s or Christian’s wrestles with the same dichotomies ! ) But some forms of Hinduism and Buddhism have a model of the “divine” as I just described where the word “grace” does not even make sense — for grace must be supplied by a person-like entity.  And in the Monkey Religions I am discussing, there is no active role of the Divine — the divine is only sustenance, it is not a caring, intervening, all-knowing, person-like being.  Yet the believers in this “Monkey God” appear as “spiritual” as the “Cat God” folks, but in their heads, they are doing very different things than the Christian theist.5

I hope that has broadened a few reader’s understanding of both the mind and models of divinity.  This self talking to you now (“me”) does not think in terms of divinity at all, but inside me, I know that sort of thinking is there.  Heck, I hate to be totally honest on this atheist site, but inside me, I am sure there are even faint beliefs in an intervening, all-powerful, all-loving, all-knowing god.  It is just that I know my Monkey God is much louder !  Smile.

1.  See my post on “Many Selves, No Self” for more details on my philosophy of mind.

2. See my post on Your Inner Theist to see how an Theist mind can exists inside an Atheist.

3. If you care for references, see Singing the Body of God by Steven Hopkins or Origin and Evolution of Religion by E. Washburn Hopkins.

5. This concept has elements related to panentheism.

39 responses to “Monkey vs. Cat Religions”