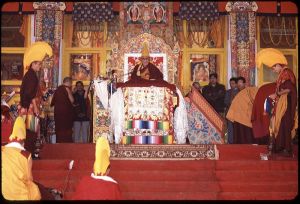 The Dalai Lama had come to Madison, Wisconsin to teach and initiate into the Kalachakra meditation practice.  His seminar lasted five days.  The first four days were held in a mundane large auditorium on U of W’s campus where the 500 of us students could easily fit.  But on day five, the culminating ceremony was held out in some natural, beautiful, wooded property outside of Madison.  There we all sat cross-legged under huge canopy tents set up to shade us from the sun for the day-long teaching.

Two hours into the ceremony, huge expansive dark clouds started to form and the wind picked up.  The tents began for flap.  His Holiness’s voice became harder to hear over the roar of the brewing storm.  So the Dalai Lama stopped the ceremony, paused and then began to explain about his personal weather man. 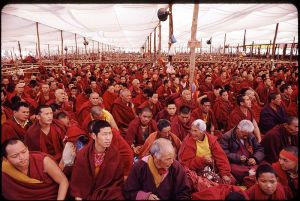 The weather man was a Shaman.  Shamanism has a long history in Tibet.  Tibetan’s native religion was a very superstitious spirit-filled animistic Shamanism called Bön.  When Buddhism came to Tibet in the 600s A.C.E. the two mixed.  Now much of Tibetan Buddhism has Bön elements.  The Shaman weatherman is one of those.  The Shaman has many other skills, of course, include curing illness and undoing curses and the lot.  But one skill was the ability to stop rain.

The Dalai Lama gave us a little talk about his Shaman before he called him out to chant away the storm.  Not wanting us to be shocked, he warned us of one curious element in the Shaman’s ritual.  He told us about the Shaman’s magic wand.  Apparently the wand was made from  the thigh bone (tibia) of his teacher, the Shaman preceding him.  Before dying, a Shaman will meditate and concentrate his own power into his own thigh bone and then his bone would be willed to his student to use as a magic wand.

As you can see here, the bone is beautifully decorated.  And indeed after the Dalai Lama’s speech the Shaman came out in all his ceremonial dress carrying the beautiful bone.  And by now the tents were flapping furiously and the skies were almost black.  This storm was happening and we all tried to figure out how we were going to get back to Madison without being soaked.  We were in the country side and vans and buses had transported us out here in shifts starting in the early morning.  Leaving would take time and these tents were not going to protect us.

But we had to watch this silly ceremony while the tenting around us was starting to come undone and the noise of the wind stopped us from hearing anything of the ceremony.  But no sooner that the Shaman’s dance and chanting had stopped than there was a lull in the wind.  The Dalai Lama gently smiled.  We all kind of smiled but knew it would start up again.  But over the next 45 minutes the sky cleared up and the storm blew over. 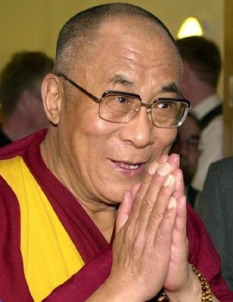 I must tell you, a friend of mine was a black-belt instructors in a local Karate Dojo was selected to be one of the body guards for the Dalai Lama during this ceremony.  And it was by my friend’s prompting that I signed up for the initiation.  But I went as a total skeptic.  I had no sympathies for Buddhism at that time and certainly no sympathies for a Pope-like leader of a Tibetan magic sect of Buddhism.  So I had no desire to see or experience anything unusual.  To the contrary, there was a large part of me which went to find things to make fun of.   But instead I went away impressed with my experience.  Besides this weather story, my other huge impression was at the amazing calm and soft nature of the Dalai Lama himself — again, that was not an impression I went in desiring to see.  Years later with a group of other Westerners, I would meet the Dalai Lama at his residence in Dharmsala, India and again find a very impressive individual.

“Dad, how did they get that bone?”

My 9-year-old son saw me writing this post and asked me where they got the dead guy’s bone.  So I told him the story below which actually took place 5 years before the above story: 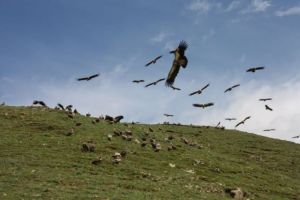 I was 19 years old living in the Himalayan foothills where I was a part-time assistant in a Christian school in Mussori, India.  One weekend I took a trip out to the rural hillsides for a day hike by myself.  These hills were sparsely populated except for an occasional small Tibetan village.  This part of Northern India had a large Tibetan population living there who had come to India after fleeing Chinese occupation of Tibet.

It was beautiful weather and I was hiking over rocky hills.  Climbing up on rocky cliff took me to a large plateau with grass fields where I saw lots of birds hovering.  And as I passed through some thick bushes on the plateau I came into an area with large wood poles sticking out of the grounds.  The poles had colorful strips of cloth tied to them that were blowing in the wind (prayer flags) and on top of the poles were wooden racks with many bones on them — human bones.  “This was a burial ground,” I thought with a shiver.  Here the birds were allowed to eat the flesh off the dead.  And thus the bones of the dead were all that remained.  (This is how the magician’s bone was obtained.)

I would return that night to my school and ask old-timers about my rather grisly experience.  They taught me about the Tibetan methods of disposing their dead called Jha-Tor (“alms to birds”, but which is euphemistically call “Sky Burial” in English).  My son found this story disgusting until I told him what happened to dead bodies in the basement of the funeral home in our town.  He was most glad I told him these stories this morning and not before going to bed at night.