“Everything happens for a reason”

1803 illustration of the two monkeys chasing their lovers. Candide shoots the monkeys, thinking they are attacking the women. HT- Wiki

The saying, “Everything happens for a reason” is commonly heard in the USA and obviously implies that things happen for a “good” reason.  Thus a variant is:  “all things work for the best”.  Inspiring this post is an interview with Drew Brees, the quarterback for the Superbowl’s 2010 victorious New Orleans Saints.  This interview was for a Christian station where Brees repeatedly evangelizes listeners that “all things works for the best” and that “everything happens for a reason”.   To illustrate this truth, he gives an example how a prior injury which, at the time he felt was the worse thing that could have happened to his career, instead ironically resulted with him being the quarterback for the victorious New Orleans Saints — you could almost hear the crowds roar has he gave his testimony in the video.  His god had it all planned.  A simple googling will find this video all over Christian sites — a sport celebrity selling their Jesus who will grant believers success in life just like Drew Brees.  This is a stepped-down version of the prosperity gospel.  But it is not just Christians who spout this mantra.  A simple googling for “Everything happens for a reason” will yield thousands of Christian, Muslim and New Age websites touting this apparent deep wisdom.

This ridiculously false idea has been attacked for centuries.  Voltaire (1694-1778), a philosopher and religious critic, took it to task in his superb short story, “Candide” (highly recommended).  Voltaire’s stark, harsh and often racy sarcasm attacks the philosophy of Leibniz (1646 – 1716, inventor of Calculus and foil for Kant).  Leibniz believed in an omnipotent, all-good, intervening God and to explain how such horrible suffering could exists in God’s world, Leibniz created his theory that “This is the best of all possible worlds”.   Voltaire disputes this Candide where Pangloss, Candide’s optimistic teacher, chants over and over “all is for the best in the best of all possible worlds” while Candide leads an outrageous life illustrating that it is patently false.

Leibniz was Christian and was trying to support his faith in the Age of Enlightenment (1700s).  But this idea had been around for a long time.  This is the major Christian Bible verse used to support this view.

We know that all things work together for good* for those who love God, who are called according to his purpose.
–Romans 8:28 (NRSV)

Not all religious people agree with this idea.  I am pleased to find that some Muslims, Jews and Christians understand that such a superficial understanding is mistaken.  Pastor Larry Osborne has written a book “10 Dumb Things that Smart Christians Believe” where “Everything happens for a reason” is listed right along with:

I have not read Pastor Osborne’s book and don’t know how he deals with Romans 8, but I wanted to illustrate that the notion of a puppet-master god manipulating the world is not necessarily a universal Christian idea.   Of course, my position rejects it too but only because I no longer believe in an omnipotent, all-powerful, all-good, intervening deity posited by theists.  I don’t view the world as having gods or spirits controlling the fate of humans, squirrels, amoeba or rocks.  And likewise, all things are certainly not for the best.  This world does not have a master plan, yet alone a puppet master guiding all events to some wonderful, albeit mysterious, end.

Four Horsemen of the Apocalypse

But here we are, Atheists and a few Christians agree that this meme is repulsive.  We both see this as a dangerous idea.  But how could such a dangerous, mistaken idea be so widespread?  As a quick diversion, let me mention a recent Behavior and Brain Sciences Journal issue dedicated to discussing “misbelief”.   Philosopher Daniel Dennett (one of the New Atheist’s 4 horsemen) has an article in the issue entitled “The Evolution of Misbelief” and several other authors respond to his theory.  I disagree with Dennett, as does Konrad Talmont-Kaminski who I have started reading today.  Konrad runs an educational atheist site called “Just Another Deisidaimon” where, like me, he plainly confesses that he is superstitious (a “deisidaimon“).

Though I judge this meme as a misbelief,  sometimes in casual or polite conversation I judge it a little more generously.  So when my superstitious acquaintance says, “Well, I believe everything happens for a reason.”  I may just tell myself they mean: “I try not to let bad things get me down and look for something good to be gained”.   This generous translation just reinterprets them saying something less superstitious like “When the world throws lemons at you, make lemonade.” 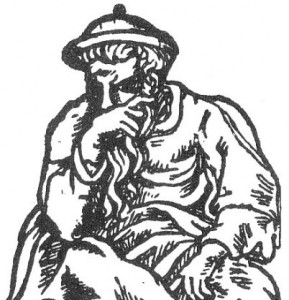 As I said, these idea of “everything happening for a reason” is found in many cultures and religions — it is a pervasive human meme.   I heard it time and time again as an explanation for karma when I lived in Hindu and Buddhist countries.  Below is a famous story from the Jewish Talmud by Akiva ben Yossef (50-135 CE,  a famous Jewish rabbi).  Akiva is referred to in the Talmud as “Rosh la-Chachomim” (Head of all the Sages) and is considered by many to be one of the earliest founders of rabbinical Judaism.  The story goes like this:

Once, being unable to find any sleeping accommodation in a certain city, he was compelled to pass the night outside its walls. Without a murmur he resigned himself to this hardship; and even when a lion devoured his donkey, and a cat killed the rooster whose crowing was to herald the dawn to him, and the wind extinguished his candle, the only remark he made was, “All that God does is for the good.” When morning dawned he learned how true his words were. A band of robbers had fallen upon the city and carried its inhabitants into captivity, but he had escaped because his abiding place had not been noticed in the darkness, and neither beast nor fowl had betrayed him (Ber. 60b).

A Misbelief’s Pros and Cons

So, what does this meme offer people in spite of its obvious mistaken cognitive notions?  What function does it offer people while sacrificing propositional truth?  Remember, people are willing to sacrifice reason if they feel the gain is worth it.    Below I undertake an exercise to see if I can list the pros and cons of embracing this meme.  You can see that it depends on the way one uses the meme as to the affect it can have on you.

The most important con for atheists is probably that this platitude encourages superstitious, irrational thinking.  But look at all the pros.  My question:  Since this meme offers so much to believers, is there something the atheist can offer to offset these benefits so that the believer can have a true belief which has comparable benefits?

I have always enjoyed this parable as my counter to the common “Everything works for the best” mantra.  This is a Taoist parable reportedly told by Master Lie (Lie Yukou) in the 500s BCE.   The Taoist farmer is surrounded by neighbors who are swayed easily by any condition in life but he chooses to take things in pace, neither overly optimistic nor pessimistic– he abides in the Tao.  Here is the story:

A year later the nomads came in force across the border, and every able-bodied man took his bow and went into battle. The Chinese frontiersmen lost nine of every ten men. Only because the son was lame did the father and son survive to take care of each other. Truly, blessing turns to disaster, and disaster to blessing: the changes have no end, nor can the mystery be fathomed.

This simple Taoist reply to misfortune reminds me of the infamous, humorous list of religious stereotypical replies to the question of “Why do bad things happen?”  Below I list a few:

42 responses to ““Everything happens for a reason””