Was Jesus a Coward?

Today is Easter, and what a better day to highlight the myth about Jesus’ supposedly heroic deed of dying to save all humanity.

I originally entitled this post “Jesus was a Coward!”  But I  decided to soften it because such an opinion really depends on a Christian’s particular theology.  You see, there are lots of contrary Christian theologies explaining Jesus’ mission (see my “Atonement Theology“). But by the logic of the most common Christian story of Jesus’ mission, Jesus certainly was a coward. I will explain below.

Before we begin with the Bible story, let your mind recall some real everyday mortal heroes that you have seen or heard of — men and women who have bravely run straight into the face of danger and possible death to save other people. We all know stories of war heroes, firefighters, and even ordinary citizens during disasters like floods, plane crashes and earthquakes. These people put their lives in danger without lamenting before they save others. Yet Jesus, before his execution, was begging for it not to happen.  Read here:

Jesus at Gethsemane before his capture

And he took with him Peter and James and John, and began to be greatly distressed and troubled. And he said to them, “My soul is very sorrowful, even to death; remain here, and watch.” And going a little farther, he fell on the ground and prayed that, if it were possible, the hour might pass from him. And he said, “Abba, Father, all things are possible to thee; remove this cup from me; yet not what I will, but what thou wilt.”
— Mark 14:33-36 (RSV)

Why all his holy whining?  After all, Jesus was God.  He knew he was going to die to save ALL of humanity — not just a few people in a burning building or a one person washing down a river, but ALL of humanity. Heck, any of these non-god regular heroes would have gleefully, without a second thought, have thrown themselves at death to save ALL of humanity — yet they were only saving a few people at best and, unlike Jesus, they did not complain at all.  Jesus in such anguish over his coming short death that God (his Dad) sent an angel to comfort him.

Then an angel from heaven appeared to him and gave him strength. 44 In his anguish he prayed more earnestly, and his sweat became like great drops of blood falling down on the ground.
— Luke 22:43-44 (note, some old texts omit this) 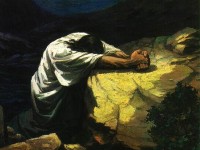 To top it off, according to the myth, Jesus knew he would come back from the dead. Our non-god heroes, for all they knew, would be snuffed out and never come back to life. Or if they did believe in an afterlife, these real heroes certainly did not have the god-like confidence that Jesus (God himself) would have had concerning his own salvation.  So our real heros run without complaints to save just a few people without any real hope of every living again.

Yet in the Garden of Gethsemane and on the cross, Jesus was scared and crying.  He kept his friends close to him  because he was “greatly distressed and troubled”.  And when you think of all the terrible deaths many humans have had, crucifixion is not so terrible — well, certainly not as terrible as you might expect of a sacrificial act to redeem all of humanity.  Billions of humans have suffered much more than Jesus.

So, Jesus only suffered a little and his life was relatively a piece of cake prior to that. He was dead within a day and yet many people are tortured and suffer long deaths.  And Jesus knew he wouldn’t really die.  Jesus had a fantastic mission — to save all of humanity from eternal damnation or annihilation.  Yet he was scared and whining.  Jesus was no hero, by the common story, Jesus was a mundane coward.

Now, if the stories after his death were contrived, and Jesus was just a Rabbi who was surprised by his own execution, then he was not a coward when facing death, he was just like you and me — ordinary folks (not heroes).  If you think I have this all wrong, please let me know where my mistake lies, because it all seems obviously bizarre to me.

60 responses to “Was Jesus a Coward?”