When I arrived in Japan I spoke absolutely no Japanese and I had no money for lessons and so I taught myself the language which meant lots of mistakes.  But immersion helped me learn quickly.  My first immersion was at  a Zen temple where I practiced Kung Fu (Japanese: Kempo).  The Kempo vocabulary was conveniently limited: “kick”, “punch”, “stand”, “meditate”, “wash” … (see my post here).  And fortunately it did not take long to build competency in understanding the simple commands so as to enjoy temple life.

After our three hours of fighting, our sessions would end with mutual shiatsu (massage).  One of the words I learned during our shiatsu practice was “boki” (ボキ) which is the sound of a joint cracking — it was most often heard when backs were twisted or bent.  Ahhhhh!

But with only a limited vocabulary, I wanted to add feeling to my otherwise childish ‘conversations’.  It was then that I discovered a trick used to add emphasis to Japanese words. In English, if we want to emphasize a word, one way we do it is by stretching out the vowel sound.  For example:

In Japanese, instead of lengthening the vowel, they lengthen the consonant to emphasize a word.  In linguistics, this is called “gemination” and is done by the Japanese letter called the  “sokuon” which can sound a bit like a glottal stop (for those of you interested in the terms).   Transcribing this sound into English is done by doubling the consonant.  So here are two examples:

Just as in written English you don’t see all the “i”s in biiiiiiig,  so in written Japanese you don’t see the double consonant when expressing this exaggeration — it is all done in speech.   Actually, to complicate things, depending on the word, actually putting sokuon in a written Japanese word may actually change the meaning of the Japanese word.   I did not fully understand this complexity and it led to my embarrassing mistake which I will now tell you. 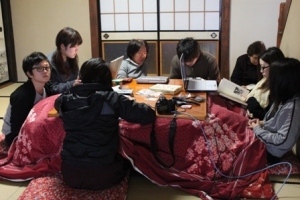 Studying around a Kotatsu

My story returns back to the Zen temple where, on one winter day, we had a large party.  Men and women attended, sake was served and I was the only foreigner there.  We sat at tables with blankets on them and heaters underneath called kotatsu.  Kotatsu kept your legs and whole body warm because the temple was not centrally heated.

We were all enjoying ourselves and I stretched and twisted my spine to freshen up.  My back made a big crack (“boke”) which felt great and relieved the tension in my back from sitting that long time on the floor.  So I had big smile on my face.  My friend across the table yelled over to me inquiring:

friend: Sabio-san, why the big smile.
me: I just had a craaaack [in my back].

With that, everyone started laughing uproariously and picking up the blanket on the kotatsu look at my ‘legs’.  I laughed nervously not understanding only to find out later my mistake.

I said, “boke” (cracked-joint) but wanted to emphasize it to show why the big smile so I said “bokke”.  Well, boke is one of those words that changes meaning when a sokuon (double vowel) is used:

So the conversation they heard was:

friend: Sabio-san, why the big smile.
me: I just had a huge erection.

Thus everyone giggled and lifted up the kotasu blanket to see exactly what the foreigner meant.  I was reminded of that mistake for a long time.

Children also struggling to learn a language — our kids struggle to learn their native English.  And, my son’s recent mistake served as the inspiration for this post series: 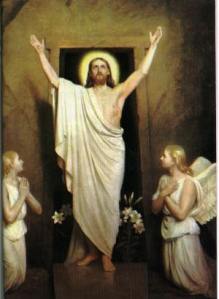 Recently my son had joined my wife and I in bed to read before going to sleep.   Taking a break during the reading, I was telling my wife about some work story with a patient with an erection problem (not unusual in a Urology practice).  My son, 11 years-old, quickly asked, “Dad, what is an erection?”  My wife cracked up laughing and my son, to protect his pride quickly tried to guess, “Wait, I think I know what it is.  Jesus had an erection, didn’t he?”  Then trying to talk over my wife’s howling laughter, I told him. “Some people think Jesus had a *resurrection* — that’s when you come back to life after being dead.  An erection is when your penis gets hard and longer.”  My son was embarrassed, but not too much because he enjoyed the humor too.

He-Rikutsu is translated in Japanese-English dictionaries as “quibble” or “sophism”, but neither of these words seems to capture the full feeling that I know in the Japanese of a very distasteful, repugnant sort of arguing style, thus I offered you the above superior definition. HeRikutus is a ripe and disgusting word!

In this post’s picture you can see that this Japanese word is made of three ideograms (KanJi) :

Just like farts, some people generate this sort of logic without effort or forethought, while others do it intentionally, almost making an art of it. But inevitably, we all let them slip out occasionally.