Your god is weird !

Ganesh and the Repairman

A while back, when living in Washington D.C.,  a telephone repairman came to my house to install some new phone outlets.  I heard the doorbell ring,  went to the door and saw the repairman standing with tools in hand ready to help me get a new computer line.  When I opened the door he put on a huge smile and with no hesitation enthusiastically greeted me saying, “Praise Jesus, good day sir!  It’s a beautiful day, isn’t it?”   I courteously bit my tongue and replied flatly , “Hello. Yes, it is a fine day.  Come in. ”   I then led him to my study where I needed a new phone jack. 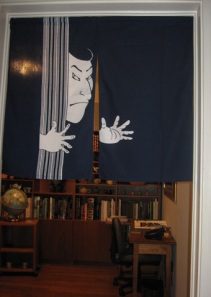 As we approached my study, I felt his curiosity when he noticed the strange-faced cloth hanging in front of my study’s entry.  But he politely didn’t ask.   So I pushed the cloth to the side and he awkwardly bowed his head to pass under the cloth and walked in my study.You see,  I used to live in Japan where cloth was often put decoratively in front of entryways — they are called “Noren”.   You can find them classically in old-fashioned inns (Ryokans), temples, traditional homes and in entries to public baths.  I had grown fond of them while there and kept one to remind me of  things I loved about Japan.   Here are some examples of other noren below to give you a taste.

Anyway, I digress.  I just wanted to say that I knew such a simple thing would still be a little unusual to many Americans.  But now my born-again Christian repairman was in for more of a surprise.  As came upon my desk he saw a poster of Ganesh, the elephant-headed Hindu god.  I could see the repairman pause as his eyes lit upon it.  Now I was sure he was biting his tongue.   He then spent 20 quiet minutes quietly and professionally installing my phone jack.  He didn’t praise Jesus once. He didn’t speak of God’s glorious creation.  He knew he was not on terribly familiar turf.  But when he finished, I could see him finally build the courage to asked me, “Do you mind if I ask you a question?”

I smiled and replied, “Do you mean, ‘Do I believe an elephant-headed boy-god lives up in the sky and will grant me my wishes if I pray to him with total belief’?”

“Well, yes” he replied just a little more nervously not realizing the implication.

“Are you serious?” I smilingly reassured him, “Of course not!  I just enjoy the image.”

With this, the repairman noticeably relaxed and replied with mild reassurance, “Oh, I was just curious.”

I decided not to discuss it further with the gentleman — I could tell he was already well outside his range of comfort.  But let me tell you another story where I did not hold back discussing the obvious.

The Sikh with a Heart Attack

Baptized male Sikhs are obliged to always wear “the Five Ks” or “articles of faith”:

Finally, in addition to the 5 Ks is the Sikh’s turban  —  a crown of  their spirituality.  Also, note that special holy underwear is not unique to Sikhs.   Such sacred undergarment is found also in Judaism and Mormonism.  In all three of these traditions, the special garments are meant as a reminder to the believer of what they have chosen to value.

The Lord said to Moses: Speak to the Israelites, and tell them to make fringes on the corners of their garments throughout their generations and to put a blue cord on the fringe at each corner. You have the fringe so that, when you see it, you will remember all the commandments of the Lord and do them, and not follow the lust of your own heart and your own eyes.
— Numbers 15: 37-39 (NRSV)