First Things is a conservative intellectual Catholic magazine.  I read it for about a year when I worked with a very devout Catholic physician who challenged me to read it.  First Things authors, in my experience, love to show off their erudition, often at the expense of a coherent message.

I was surprised when The Browser, a nonreligious on-line article aggregator, recently recommended the First Things article “All the East is Moving“. The article is by Tom Holland  and its opening blurb it says, “No longer at war with Islam, Western Europe had less need to define itself as Christ­endom, and could favour secular values over religious ones. We have come to believe that secular values will always prevail in modern societies: Is it time to revisit that assumption?”   Later in the article, he supports his thesis saying, “We don’t have too much Islam,” as German Chancellor Angela Merkel put it, “we have too little Christianity.”

It is a long article with some interesting historical information but disappointingly little support for his main thesis.

Interestingly, I found an article in the British site, “The New Humanist” where the author, Alom Shaha, interviews Tom Holland (a historian, writer and broadcaster) saying , “Tom Holland is a Christian who – by and large – doesn’t believe in God.”

When I ask him if he actually believes in the existence of a god he replies “There’s a sort of nagging, god-shaped hole in the back of my mind and the simulacrum of a god that I use to fill it is a Christian one. I could read the account of the passion, go to church on Easter and feel this is true, feel that it is articulating truths that affect me far more profoundly than I could possibly put into words, I feel myself in communion with the vast inheritance of Christian faith, I find that moving and at moments like that, I think “is this what it’s like to believe in god?” However, he also tells me that “I have seen no evidence that would satisfy me that anything supernatural exists. I have seen no proof for god.”

Tom Holland, seems to identify with an idealized version of Christianity — and he says he does so out of gratitude for his upbringing and inheritance. Tom’s article at one moment shows he knows the problems in Christian history, at the next he blindly idealizes what Christianity has to offer.  Readers can see if they agree.

Holland’s Christianity involves an idealized non-historical Jesus’ supposed Sermon on the Mount which can be seen when he says, “no text has done more to underpin the construction of a new and multicultural identity for the [European] continent than the Sermon on the Mount.”

Holland’s article talks about the fascinating connections between Tolkien, magic weapons and the Nazis.  So if you want to read a typical Catholic “First Things” article which shows off erudition, rambles a bit and all the while it does not show the best evidence for their thesis, read Holland’s article (a non-believer in god(s) but who embraces Christianity in his identity).  I actually enjoyed the Nazi and Tolkien stuff.

Questions for Readers:  Do any of you non-theist readers have a “ simulacrum of a god” that you use.  Holland does, and uses it to label himself a Christian.  What do you think of that move?

“Do you believe in God?”: 4 meta-questions

“Do you believe in God?” is a question we have all heard.  Most people take this to be a straightforward question, but readers know that I take every opportunity to discuss the unquestioned assumptions hiding behind common sense.

Here are four big activities hiding behind “Do you believe in God?”:

Understanding these four meta-questions, can help unravel the illusion spun by the apparently simple question of “Do you believe in God?”

Jaya: why read this book

This is part of my series of posts to aid in the reading of Devdutt Pattanaik’s book:  Jaya: An illustrated retelling of the Mahabharata. See my Mahabharata index for more.

Readers can either buy the book now and read it slowly with each post, wait until the series is over and then buy the book or just read the posts without reading the book.

Why read the Mahabharata:

(1) Understand Hinduism: The Mahabharata is one of the classic Hindu you need to read to understand Hinduism. It is not the dry philosophy of the Upanishads or the hard to read Vedas, and it is more complex that the simple good-vs-bad Ramayana (the other Hindu epic, see my posts here.)  And just reading books about Hinduism won’t help you feel the complexity of the faith as reading the Mahabharata will.

(2) Understand Religion: One of my agendas is to help Christians perhaps see their own religion by comparing and contrasting to Hinduism. Perhaps some Hindus will also enjoy learning about Christianity this way. And then for both the secular and religious readers, I hope to point out some of the deep structures in religion.  And all of this done in a very lay fashion — because I can do no differently! 🙂

The actual Mahabharata text is about 5,000 pages long so most translations are short retellings.  I list many of the translations and retellings available here. Pattanaik’s retelling is easy reading with lots of fun illustrations and thus an easy way to learn the story. Simply put — I like this version.

Sita in the Ramayana

A friend of mine was reading a children’s version of the Ramayana and before reaching the end of the story, she asked me to tell her what happens to Sita, because she did not want to read a sad ending that evening.  I told her, “it depends on which version you are reading.”

As illustrated by the graph of my ngram search done in 2012 (see the post here), of the Hindu holy scriptures, the Ramayana fills the most web pages.

I wrote a synopsis of the Ramayana here, but put even shorter:

Sita, the wife of the stories noble, royal hero, is abducted by the demon king, Ravana. Rama with his followers defeat Ravana and Sita returns.

As you can see by my diagram below, the Ramayana myth is very old — recorded around the same times the Jewish iron age hero stories in the Torah (see post here). And though the Torah (part of the Christian Old Testament) was edited and modified over the centuries, the Hindus are much more casual with their scriptures and today we have hundreds of versions of the Ramayana. A.K. Ramanujan wrote his controversial “Three Hundred Ramayanas” in 1987 which Delhi University later banned from their curriculum. For though the many versions were known, hard-line fundamentalist Hindus spoke out against versions which put the holiness Rama and Sita into the least bit of question.

When Sita is brought back from her long captivity with the demon Ravana her husband suspects that Sita had sex with Ravana during captivity. To prove her fidelity, Sita is the horrifically tried by fire, but in some versions even this is not enough for Rama who then banishes Sita. And the variations go on.

South Asians name their children after Sita. Sita’s is worshipped by many, and an important literary vehicle to all. The variations of stories about Mary in the Christian Bible also reflect a similar tension.

In fact, read my post here about how Ravana is viewed as noble in some versions.

It has been observations like this that has helped me to see religion myth making as a shared process across all traditions — even secular ones. Stories are always told in ways that match the desires of the story teller. 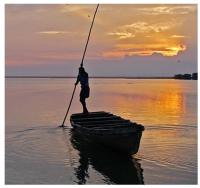 Below is a quote from the last chapter of Hesse’s 1922 novel “Siddhartha” (translated by Hilda Rosner in 1951). The quote reminds me of my post “Seachers vs Explorers“. Hesse labels the two different styles as Suchen (seeking) and Finden (finding) — or One who Seeks [one thing] versus One who Finds [many things] — see my post on “Homogenizing Reality” for a similar contrast.

Setting: Siddhartha is now an old man who works as a ferryman at a river. The Buddha is dying and many of his monks and devotees are journeying to see him before his passing. Siddartha ferries many across his river. One passenger, “Govinda”, is a former close friend of Siddhartha but he does not recognize Siddartha. Note that thought Hesse calls his main character “Siddartha”, it is not the Buddha (Siddhartha Gautama) — they just happen to share the same first names.

He arrived at the river and asked the old man to take him across. When they climbed out of the boat on the other side, he said to the old man: “You show much kindness to the monks and pilgrims; you have taken many of us across. Are you not also a seeker of the right path?”

There was a smile in Siddhartha’s old eyes as he said: “Do you call yourself a seeker, O venerable one, you are already advanced in years and wear the robe of Gotama’s monks?”

“I am indeed old,” said Govinda, “but I have never ceased seeking. I will never cease seeking. That seems to be my destiny. It seems to me that you also have sought. Will you talk to me a little about it, my friend?”

Siddhartha said: “What could I say to you that would be of value, except that perhaps you seek too much, that as a result of your seeking you cannot find.”

“How is that?” asked Govinda.

The Panchatantra: Morality via Death

Westerners often romanticize the myths of other lands while belittling their own scriptures. As I wrote here, the Hindu Mahabharata has far more death than the Jewish Tanakh (the “Old Testament”).  And in this illustration I show a few of the many stories from the Panchatantra, that use death and cruelty to teach morality. Ancient writers had a different world than ours – death was always a threat.

When I first began to explore the Panchatantra, I read these stories to my daughter.  She was quick to point out how horrible all the murder morality was and didn’t want to hear any more. So now I am alone to explore this book academically. 🙂

The horrors of fundamental and even of moderate Islam are obvious. But when Christians criticize the supposedly sacred ideas and writings upon which these Muslim’s support their horrible ideas (the Qur’an and Hadith), the Christians’ ignorant irony is laughable.  The above cartoon by the famous Australian cartoonist Michael Leunig captures that same tragic irony that I also expressed in my 2010 post “Your God is weird!”.  Death theology, Exclusivist theology, Tribal theology and all such wrong thoughts must be fought constantly — sacred or secular.  Freedom from stupidity is not a right, it is the tenuous fruit of constant effort.

Triangulations
Create a free website or blog at WordPress.com.